The Tamilok Challenge! Unless you’ve been living under a rock you’ll know that once again Palawan has been decreed the “best island in the world”, although who says this and for what reason is anyone’s guess. But you cannot deny it’s a damned pretty island, and one we visit every year for our Island Hopping Tour.

Now the Good Lord surely does work in mysterious ways, and it is for this reason I feel that after God gave the Philippines immense natural beauty, he decided to even things up by giving them godawful food. Well; either God or the Americans during their time as colonial overlords. Anyway the net result is bad food; food so bad that the national dish is something called “balut” which is a fertilized duck egg complete with feathers, beak, the whole nine yards. Yum. On my latest visit to Palawan I was to discover another great culinary weirdness: tamilok and the “Tamilok Challenge”

So, what is tamilok?

So, what is culinary delight of tamilok? It’s referred to by the locals as woodworm. Thankfully it is not actually a woodworm, but a mollusc with massive teeth. Feel better now? We thought you would.

Why is it called tamilok? 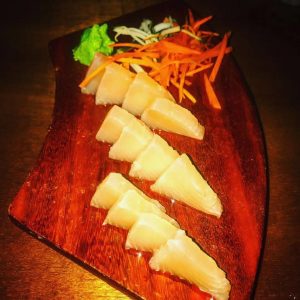 Apparently 2 GIs were on Palawan during WW2 and saw some people eating woodworm, and it freaked them the hell out. One said “Tommy, look!” which became “tamilok”.

Related Post  Introducing the weird and wonderful Balut (do YOU dare?)

How is tamilok served?

There are two ways to eat tamilok: either as kind of ceviche – known locally as kinilaw – or you can deep-fry that bad old woodworm. Yummy!

Can you eat tamilok?

Well that is quite the question isn’t it. Can YOU eat tamilok? I can and I did (taste to follow). But whether you can eat tamilok is another question. As I have said before, any food that has a challenge attached to it isn’t for the faint of heart.

The interwebz says that tamilok tastes a bit like oyster. It does not. It tastes like I imagine man-juice to taste if it was served in dishwater. And the deep-fried tamilok? When it came to the deep fried tamilok this where I saw the oyster comparison. I have my oysters raw and see a cooked oyster as an abomination. Deep-fried tamilok merely forces you to chew the wretched beast, rather than consume it in one go. IF you try tamilok, go for the ceviche/kinilaw. If you like it you can always try deep-fried tamilok after. 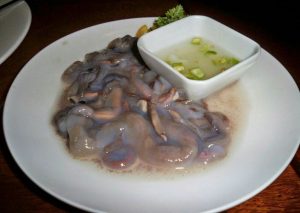 What is the tamilok challenge?

The tamilok challenge is proof, if ever it was needed, that tamilok is just wrong in so many ways. If a food has the word “challenge” after it, it means that merely eating it is a challenge. That is exactly what the tamilok challenge is: can you eat it without vomiting? I managed 5. Point now proven, there is no need to eat it again. Ever. Although with that being said, I will probably have to man up when we do a tour to Palawan again (guests seem to get a kick out of seeing me punish myself).

Is tamilok the worst food on the planet?

In reality there are many worse foods out there than tamilok. Spend any amount of time eating bugs in say Cambodia and you will attest to that.  And then there is the joy of hakarl in Iceland. Hakarl is literally rotten shark.  Harkarl does though come with liquor to wash it down. With tamilok I strongly suggest a Tanduay – the worlds best rum (kinda) as a chaser.

As things currently stand I’d eat a bowl full just to be able to travel again…..

Thanks for the photos from @chuonifczanzibar see t

A sweet jelly made from coconut flesh #phnompenh #