Solomon Islands had led me to believe that there were in fact no restaurants at all in the country with my trip around the capital city. And that people merely chewed the narcotic “betel nut” when they were hungry. Thankfully, the second  proved me to be very wrong. 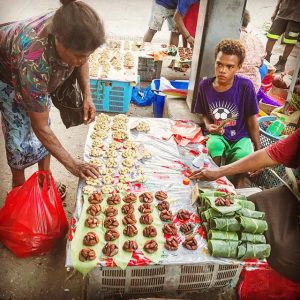 It is a country that has had a fair bit of strife. And recently, Solomon Islands called a failed state. A lot of this strife has been directed at the Chinese community. Who like in other countries such as Indonesia, and the Philippines have been accused of taking and controlling all the wealth.

On My first trip, we had arrived 3 hours early to the airport. But we are laughed at by the staff…..So we went exploring. The whole line of shops opposite merely sold the narcotic betel nut. Except one lady selling BBQ chicken. It’s not the greatest I have tried. Then we boarded our flight. 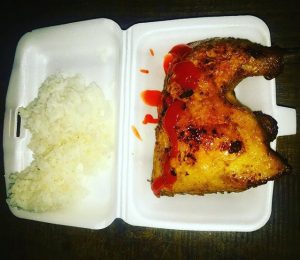 Trip number 2 as to prove a revelation. Not only Honiara Hotel serving great cuisine. But also snorkeling at a beach had us passing through a whole street that was BBQing up a storm!

We stopped on the way in to check it out and ofcourse, eat. The ladies informed us that they were cooking 7 days a week, servicing the people using the road. And that all their food was fresh. Well, there was only one way to find out!

Cooking style was using a metal hot plate/top over a metal drum where the wood fire was. As well as no grill and grease galore. The menu consists not only all kinds of fish (some of whom looked pretty mean) but also chicken and hotdogs. 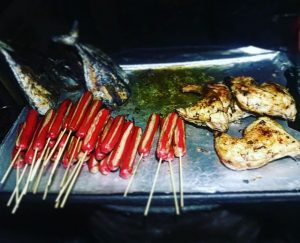 It came with rice and pumpkin. And cost about $6 with a hot dog being the cheapest option at $1.50.

Honiara barbecue is greasy but flavoursome which all good by me. The only problem (which I found on my first trip as well) is capitalism. Or local trends have not yet reached a level. Where they have considered offering a drink with the meal. But with local boiled water being the best they can manage.

My first success street food wise in Solomon Islands is trying chicken and parrot fish. But I also tried not one but two hotdogs.

We recommend the street food of Solomon Islands!