Let’s be honest! The Philippines don’t exactly have the reputation for having the worlds best cuisine. Especially when your neighbors are Thailand, China, Vietnam, Korea, and Japan. This makes putting down your culinary stamp that every bit harder. But it has JOLLIBEE! And to add insult to injury, whilst countries such as Vietnam had the gastronomical overlords of France running their affairs. The Philippines got 50 years of America, home of the Big Mac!

One thing you notice in Manila. Major cities, service stops, malls and even the airport are that the Philippines much like the USA really love a franchise. Malls being a particular example of this with every major American variation being available. But most interestingly a ton of regional favourites (many of which have since spread to the Filipino diaspora). One of these is Jollibee.

Two of the main franchises are Jollibee, whose main dish is burgers, and Max’s Restaurant, analogous to McDonald’s. And KFC it would appear and in my ignorance, I had assumed are both direct copies of their American counterparts. But it turns out the history is slightly more interesting!

So let’s start with Jollibee! For starters, they are the most popular fast food chain in the Philippines by far. You can find McDonald’s, Burger King, and KFC a plenty, but Jollibee is everywhere.

Now the story goes that the Caktiong family opened a Magnolia Ice-Cream stand in 1975 in Quezon City. Finding that people could not live on ice-cream alone, they started to offer hot meals. Eventually dropping the whole ice-cream fad in 1978. Going all corporate and beginning to franchise in 1979.

Interestingly, this meant that when McDonald’s the granddaddy of fast food joined the race in 1981, Jollibee were already not only well ahead of the curve. But tailored their menu around Filipino tastes, something that has resulted in some of their more mocked dishes. Such as the Jollibee Spaghetti. Aside from it, other famous dishes are the fried chicken with gravy, cheesy fries, and the Yummy Burger. Nowadays, it has branches in 6 countries. That largely cater to expat workers from the Philippines, but nevertheless, make Jollibee a global brand. And whilst you might not see them in every corner of the world, Jollibee is by far the biggest fast food restaurant in the Philippines.

So what’s the food like at Jollibee? Overall whilst it’s a mixed bag of tricks, it is certainly much more than just a McDonald’s clone.

Burgers are a big thing in the Philippines due to the American influence. With small burger shacks of varying quality being throughout the country. The “Yummy Burger”, which is the Jollibee version of the “Big Mac” is a very Filipino type burger. But overall pretty much, and without the salad, we insist on with western franchises. 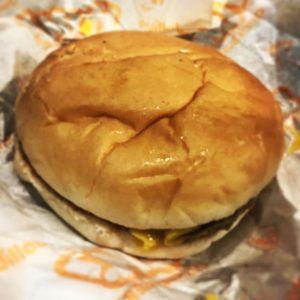 All the franchises of the Philippines and the world, it now seems do their own take on Fried Chicken. Personally, I am full on religiously devout when it comes to fried chicken. So whilst Jollibee chicken is no Kentucky Fried Chicken, it is of a much higher quality than you get in McDonald’s or Chowking. And it comes with a spicy gravy that pretty drinkable. 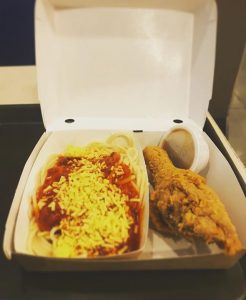 They serve a lot of Filipino style dishes with rice which I avoided like the plague. But one thing that simply could not be ignored was their infamous Spaghetti. Spaghetti in Filippino sauce with Cheese is a big thing out here. And whilst it hardly likes something cooked from Mommas kitchen in Rome, it’s not without its pleasures.

So Jollibee is no knock-off brand, it’s its own thing. It’s truly Filipino food and you really have not been to the Philippines unless you try it at least once.